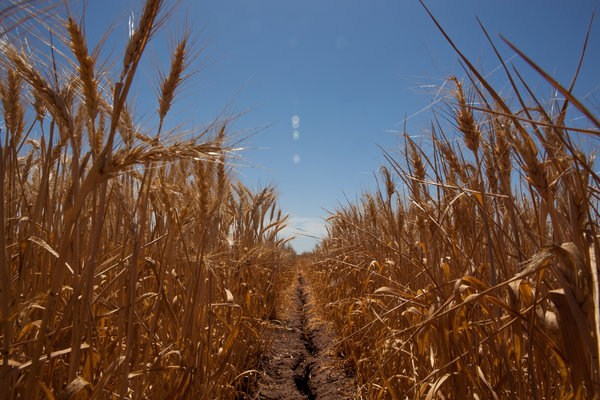 Climate change will pose sharp risks to the world’s food supply in coming decades, potentially undermining crop production and driving up prices at a time when the demand for food is expected to soar, scientists have found.

In a departure from an earlier assessment, the scientists concluded that rising temperatures will have some beneficial effects on crops in some places, but that globally they will make it harder for crops to thrive — perhaps reducing production over all by as much as 2 percent each decade for the rest of this century, compared with what it would be without climate change.

And, the scientists say, they are already seeing the harmful effects in some regions.

The warnings come in a leaked draft of a report under development by a United Nations panel, the Intergovernmental Panel on Climate Change. The document is not final and could change before it is released in March.

The report also finds other sweeping impacts from climate change already occurring across the planet, and warns that these are likely to intensify as human emissions of greenhouse gases continue to rise. The scientists describe a natural world in turmoil as plants and animals colonize new areas to escape rising temperatures, and warn that many could become extinct.

The warning on the food supply is the sharpest in tone the panel has issued. Its previous report, in 2007, was more hopeful. While it did warn of risks and potential losses in output, particularly in the tropics, that report found that gains in production at higher latitudes would most likely offset the losses and ensure an adequate global supply.

The new tone reflects a large body of research in recent years that has shown how sensitive crops appear to be to heat waves. The recent work also challenges previous assumptions about how much food production could increase in coming decades because of higher carbon dioxide levels in the atmosphere. The gas, though it is the main reason for global warming, also acts as a kind of fertilizer for plants.

The Intergovernmental Panel on Climate Change is the principal scientific body charged with reviewing and assessing climate science, then issuing reports about the risks to the world’s governments. Its main reports come out every five to six years. The group won the Nobel Peace Prize, along with Al Gore, in 2007 for its efforts.

Hundreds of billions of dollars are being spent every year to reduce emissions in response to past findings from the group, though many analysts have said these efforts are so far inadequate to head off drastic climatic changes later in the century.

On the food supply, the new report finds that benefits from global warming may be seen in some areas, like northern lands that are now marginal for food production. But it adds that over all, global warming could reduce agricultural production by as much as 2 percent each decade for the rest of this century.

During that period, demand is expected to rise as much as 14 percent each decade, the report found, as the world population is projected to grow to 9.6 billion in 2050, from 7.2 billion today, according to the United Nations, and as many of those people in developing countries acquire the money to eat richer diets.

Any shortfall would lead to rising food prices that would hit the world’s poor hardest, as has already occurred from price increases of recent years. Research has found that climate change, particularly severe heat waves, was a factor in those price spikes.

If the report proves to be correct about the effect on crops from climate change, global food demand might have to be met — if it can be met — by putting new land into production. That could entail chopping down large areas of forest, an action that would only accelerate climate change by sending substantial amounts of carbon dioxide into the air from the destruction of trees.

The report finds that efforts to adapt to climate change have already begun in many countries. President Obama signed an executive order on Friday to step up such efforts in the United States. But these efforts remain inadequate compared with the risks, the report says, and far more intensive — and expensive — adaptation plans are likely to be required in the future.

The document also finds that it is not too late for cuts in emissions to have a strong impact on the future risks of climate change, though the costs would be incurred in the next few decades and the main benefits would probably be seen in the late 21st century and beyond.

The leak of the new draft occurred on a blog hostile to the intergovernmental panel. In a brief interview, a spokesman for the panel, Jonathan Lynn, did not dispute the authenticity of the document.

Several scientists involved in drafting the document declined on Friday to speak publicly about it. In the Internet era, the group’s efforts to keep its drafts secret are proving to be a failure, and some of the scientists involved have called for a drafting process open to the public.

A report about the physical science of climate change leaked in August, then underwent only modest changes before its final release in Stockholm in late September. The new report covers the impact of climate change, efforts to adapt to it, and the vulnerability of human and natural systems.