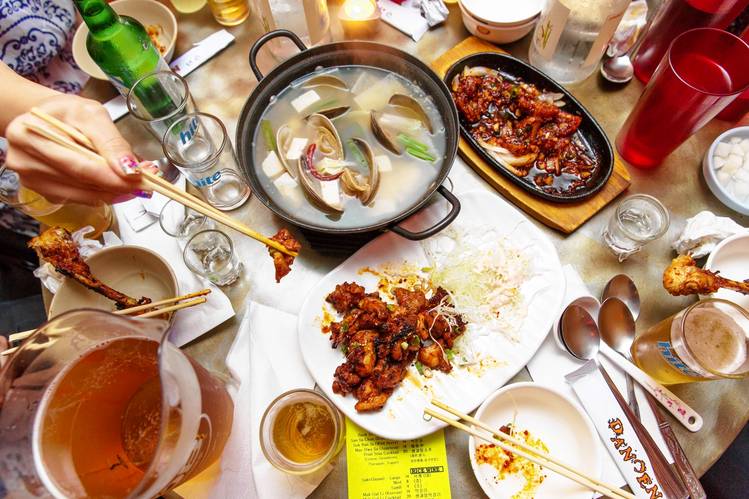 BEVERLY KIM GREW UP outside Chicago eating in the traditional Korean way—a far cry from the towering platters of grilled beef and rice bowls that have come to define Korean food in the U.S. “We had at least two pots of soup firing on the stove at all times,” said the James Beard Award-nominated chef-owner of Parachute, a restaurant serving Korean and Korean-influenced dishes in the city’s Avondale neighborhood. “Broth is the foundation for everything I know.”

Americans’ relationship with Korean food has hit an exciting fork in the road, which I write about in my new book, “Koreatown: A Cookbook.” Many flock to Koreatowns across the country in search of the ever-popular Korean barbecue—hunks of tender short rib sizzled on tabletop grills and wrapped in lettuce leaves—and rightly so. Yet other, more ambitious eaters have started to seek out Korea’s deep bench of delicious soups and stews packed with unexpected flavors and textures that extend well beyond the sourness and funk of kimchi, the fermented vegetables that are another signature of this cuisine.

I’ve found Korean cooking in expected places—the big Koreatowns in L.A. and New York—but also in Duluth, Ga., Western Michigan and the kitchens of celebrated (and not explicitly Asian) restaurants like State Bird Provisions in San Francisco and Le Bernardin in Manhattan. The common starting point? More often than not, a simmering stock.

“You can taste the history,” said Deuki Hong one day while minding a hulking stockpot of mellow ox bone broth called seolleongtang in his midtown Manhattan apartment. Mr. Hong, the chef of New York’s Kang Ho Dong Baekjeong, is my “Koreatown” co-author, and he wasn’t just talking about how the bones in the pot were releasing their creamy marrow through hours and hours of bubbling and boiling.

There’s a context to consider: Korea is a very cold place. Think Minneapolis or Helsinki cold. The winters are long and cruel. The mountainous terrain provides limited space for cattle grazing and hog raising; Korea’s meat prices are among the world’s highest. Add to that a long history of war, occupation and impoverishment, but also an abundance of fresh, clean water. Bodies needed warmth, meat had to stretch. You might say Koreans had no choice but to become the soup and stew masters of Asia.

Through deep assessment and countless evenings spent hunched over a roaring pot of jjigae—a spicy stew loaded with meat, seafood, vegetables or all three—I’ve come to the conclusion that Korean soups can be broken roughly into two categories: graceful broths and intense, umami-rich flavor bombs.

In the more delicate category, kongnamul guk is a soup of soybean sprouts boiled quickly in a light beef or anchovy broth. Another example: miyeok guk, a briny, nutrient-rich soup of seaweed and beef brisket sometimes called “happy birthday soup” because it’s eaten by nursing mothers and by Koreans celebrating their birth.

One of my favorites, jogaetang, a bowl of clear anchovy broth gets a little heat from jalapeños and substance from clams. This light and highly satisfying soup often appears at pojangmachas, late-night Korean taverns, where it’s served on a portable butane burner and washed down with beer and soju, the ubiquitous Korean firewater.

The more muscular side of Korea’s soup and stew canon plays its own cultural role. While many Americans go for a dollar pizza slice or a heap of greasy diner bacon to quell a hangover, Koreans turn to soup. In fact, haejangguk—a bracing bowl of tender ox-spine meat, coagulated blood cubes and beef broth—bears the name “hangover soup.”

This latter category does contain some acquired tastes. Ms. Kim recalls her mother’s beloved cheonggukjang jjigae, made with ripe fermented soybeans and sometimes called “dead body soup.” “My mom was really self-conscious about how our house smelled, and she would boil [the soup] on the grill outside,” she said. “But it’s really quite incredible and reminds me of a nutty cheese.”

‘Koreans had no choice but to become Asia’s soup masters.’

This group includes plenty of highly accessible crowd-pleasers, too. Kimchi jjigae, the great utility dish of Korean cooking—a piquant stew full of Napa-cabbage kimchi, the fermented soybean and red-pepper paste gochujang and rich pork belly—often arrives at the table boiling. (If you’re going to eat a lot of Korean soup, you must perfect a blowing-on-the-spoon technique.) My favorite kimchi jjigae contains the fizzy and deeply funky kimchi called mukeunji, aged for well over a year. Seek it out.

Another hearty bowl I’ll travel a long way for is gamjatang, which literally means “potato soup.” It’s so much more than that. While chunks of potato play their part, meaty pork necks, cooked to the point of falling off the bone, provide further ballast, and floral wild sesame seeds add their perfume. “It reminds me of a Oaxacan mole,” said Los Angeles Times restaurant critic Jonathan Gold when we shared a large bowl at Ham Ji Park, a restaurant specializing in pork in L.A.’s sprawling Koreatown.

I think gamjatang has great crossover appeal for Korean food fans looking outside the lettuce wrap. As does another favorite: kalbijjim, beef short ribs stewed low and slow in a balanced blend of light soy sauce, sake, mirin, apple-and-Asian-pear purée and garlic. “This is one of the dishes that every Korean mom has a recipe for,” said Mr. Hong, calling it the “Korean coq au vin.” His uses a slow cooker, a fully Americanized approach to preparing a traditional Korean dish. “It’s one of those special-occasion stews, like if you were accepted to college or family was visiting from far away,” he added.

In Korean culture, soups and stews not only cure sickness and recalibrate the body after a long night of bar hopping; they’re the stuff of celebrations. At every meal and any time of day, they command the center of the table. The next time you look at a Korean menu, read on past the barbecue section and survey the vast spread of soups and stews—those mentioned here and many others—that lie beyond. Or prepare one of the recipes on this page, while the weather outside is as cold as Korea in February.

—The Korean ingredients in all of these recipes can be purchased at Asian markets or online at crazykoreanshopping.com