Going to bed at the same time every night could give your child’s brain a boost, a recent study found.

Researchers at University College London found that when 3-year-olds have a regular bedtime they perform better on cognitive tests administered at age 7 than children whose bedtimes weren’t consistent. The findings represent a new twist on an expanding body of research showing that inadequate sleep in children and adolescents hurts academic performance and overall health. 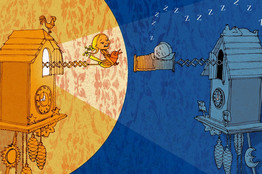 The latest study considered other factors that can influence bedtime and cognitive development, such as kids skipping breakfast or having a television in their bedroom. After accounting for these, the study found that going to bed very early or very late didn’t affect cognitive performance, so long as the bedtime was consistent.

“The surprising thing was the later bedtimes weren’t significantly affecting children’s test scores once we took other factors into account,” said Amanda Sacker, director of the International Center for Lifecourse Studies in Society and Health at University College London and a co-author of the study. “I think the message for parents is…maybe a regular bedtime even slightly later is advisable.”

The researchers suggested that having inconsistent bedtimes may hurt a child’s cognitive development by disrupting circadian rhythms. It also might result in sleep deprivation and therefore affect brain plasticity—changes in the synapses and neural pathways—at critical ages of brain development.

Sleep experts often focus largely on how much sleep children get. While that is important, “we tend to not pay as much attention to this issue of circadian disruption,” said Judith Owens, director of sleep medicine at Children’s National Medical Center in Washington, D.C., who wasn’t involved with the study.

Insufficient sleep and irregular bedtimes may each affect cognitive development through different mechanisms, Dr. Owens said. “The kid who has both [problems] may beat even higher risk for these cognitive impairments,” she said.

The study, published online in July in the Journal of Epidemiology & Community Health, examined data on bedtimes and cognitive scores for 11,178 children.

The children were participants in the U.K.’s Millennium Cohort Study, a nationally representative longterm study of infants born between 2000 and 2002.

Mothers were asked about their children’s bedtimes at 3, 5 and 7 years of age. Nearly 20% of the 3-year-olds didn’t have a regular bedtime. That figure dropped to 9.1% at age 5 and 8.2% at age 7. Mothers were also asked about socioeconomic and demographic characteristics and family routines.

When the children were 7 years old, they received cognitive assessments in reading, math and spatial abilities. The poorest test scores were recorded by children who went to bed very early or very late, and by those who had inconsistent bedtimes, said Dr. Sacker. But once other factors in the home were taken into account only the inconsistent bedtime was associated with lower scores, she said.

Yvonne Kelly, a co-author of the study and a professor in the department of epidemiology and public health at University College London, said the researchers aren’t sure why girls seemed to be more affected. She noted that the difference in scores between these groups of girls and boys wasn’t statistically significant for the reading and spatial tests, but it was for the math test.

“I don’t think for one moment that boys are immune to these things and girls are more affected,” Dr. Kelly said.

The researchers didn’t have data on the total number of hours children slept overnight because mothers weren’t asked about what time the children woke up.

In general school-age kids—kindergarten through eighth-grade—should be getting about 10 hours of sleep, while 3- and 4-year-olds might need 11 to 13 hours, including day-time naps, said Shalini Paruthi, director of the pediatric sleep and research center at SSM Cardinal Glennon Children’s Medical Center at Saint Louis University.

Dr. Paruthi said the good news from the study is that the majority of the children went to bed at a consistent time, reinforcing advice from sleep specialists. “The younger the child is, the better it is to get into the habit of a regular bedtime,” said Dr. Paruthi, who wasn’t affiliated with the study. She recommends a 15-minute, pre-bedtime routine to help the brain transition from a more alert to a quiet state.

And in order to keep the body’s internal clock in sync with the brain, bedtimes on weekends and in the summer should only stray from the normal time by an hour or less, Dr. Paruthi said. “The internal clock in the brain and the body like to have consistency every day,” she said.

Write to Sumathi Reddy at sumathi.reddy